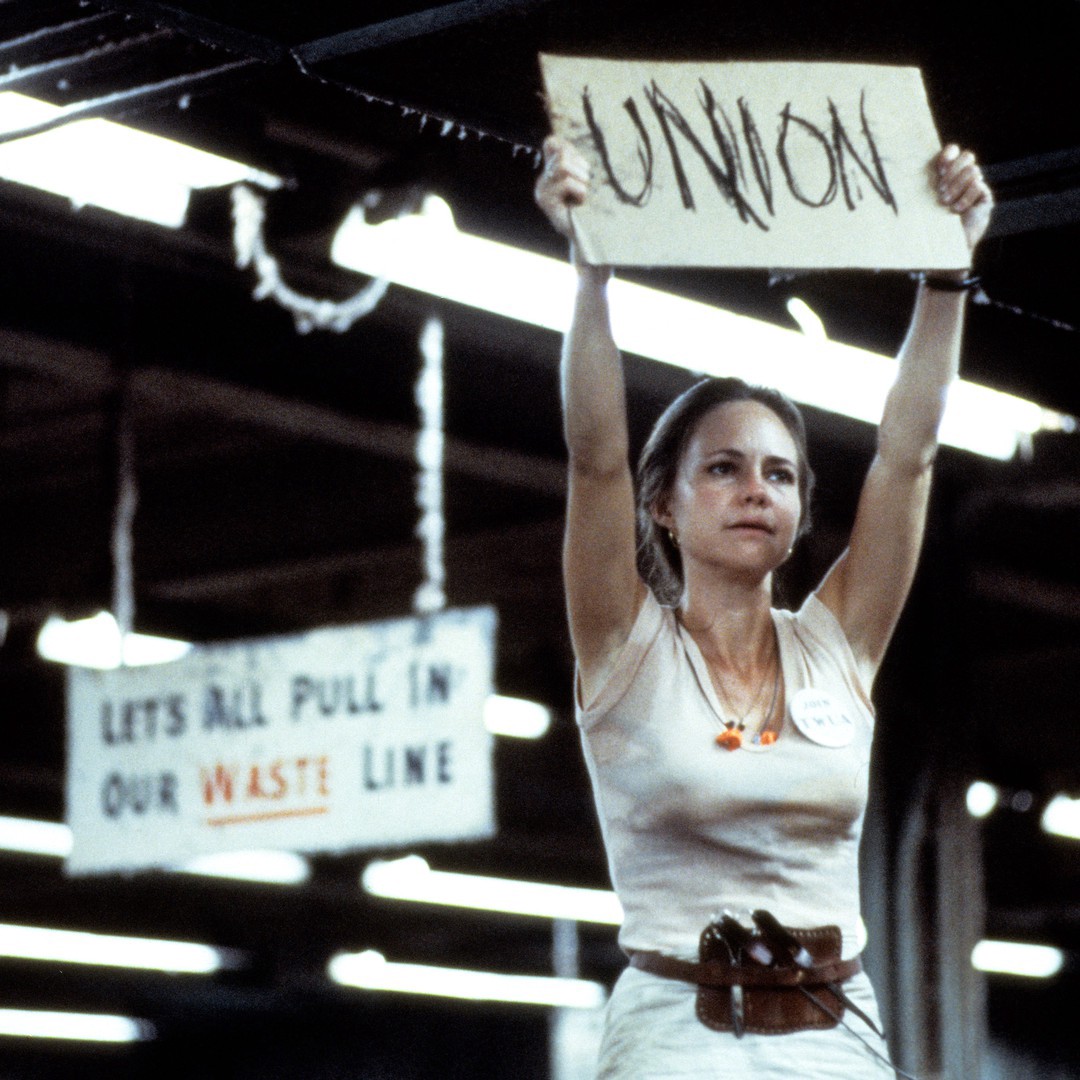 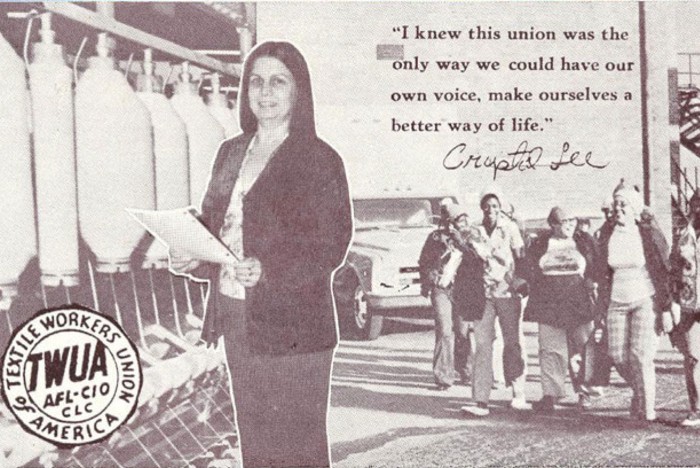 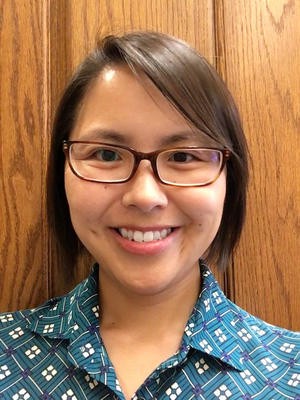 Nima: Now, before the union members vote on whether to introduce the women into the picket line, as suggested, Esperanza insists that the women be allowed to vote, and the motion narrowly passes. People begin marching immediately, though some women’s husbands, including Esperanza’s, prohibit them from joining the picket line. But eventually Esperanza joins the picketers and is arrested herself, along with her children, other picketers, and their children. In jail, the women make demands for baby formula, bathroom access, and other necessities, mirroring those of the miners.
The children are released, and Ramón handles the housework while Esperanza is forced to stay in jail. Ramón, resentful of Esperanza’s growing independence, insists that the women have no chance of winning, but Esperanza maintains that they can outlast the company and criticizes her husband Ramon for treating her just as the bosses treat him.
[Begin Salt of the Earth Clip]
Esperanza: Have you learned nothing from this strike? Why are you afraid to have me at your side? Do you still think you can have dignity only if I have none?
Ramon: You talk of dignity? After what you’ve been doing?
Esperanza: Yes. I talk of dignity. The Anglo bosses look down on you, and you hate them for it. “Stay in your place, you dirty Mexican.” That’s what they tell you. But why must you say to me, “Stay in your place.” Do you feel better having someone lower than you?
Ramon: Shut up, you’re talking crazy.
Esperanza: Whose neck shall I stand on, to make me feel superior? And what will I get out of it? I don’t want anything lower than I am. I’m low enough already. I want to rise. And push everything up with me as I go.
Ramon: Will you be still?
Esperanza: And if you can’t understand this you’re a fool because you can’t win this strike without me! You can’t win anything without me!
[End Salt of the Earth Clip]
Nima: Later, the company obtains an eviction order against the strikers, and the police start the process at the Quintero house. The strikers’ families defy the eviction order however, returning the Quinteros’ belongings to their home. Vastly outnumbered, the police leave, meaning the families have won the strike and that they can stay in their houses. Ramón thanks Esperanza for her work and for preaching a message of unity.
Adam: The film was produced by Independent Productions Corporation, founded by Simon Lazarus, Herbert J. Biberman and producer Paul Jarrico, both of whom were blacklisted at the time and used the company to hire other blacklisted filmmakers. Writer Michael Wilson had been blacklisted as well. Salt of the Earth was also produced in partnership with the International Union of Mine, Mill, and Smelter Workers.
The story was based on the actual strike of 1951–1952 by the International Union of Mine, Mill and Smelter Workers against Empire Zinc, a subsidiary of New Jersey Zinc. Two of the film’s cast members — Juan Chacón, who played Ramón, and Clinton Jencks, who played another character named Frank Barnes — were actually members of the union and strike participants. Chacón, in fact, was president of one of the union locals.
Nima: So yeah, this was basically a lefty labor-made film starring actual union organizers, past strikers as, you know, actors in the film. Now Unsurprisingly, the film Salt of the Earth had many powerful detractors. According to the American Film Institute, quote:
In February 1953, during filming, California Republican Representative Donald Jackson, a member of the House Committee on Un-American Activities (HUAC) from California, declared that [Salt of the Earth] was ‘deliberately designed to inflame racial hatreds,’ and was ‘a new weapon for Russia.’
End quote.
Simon Lazarus, founder of the film’s production company, was called to testify before Jackson’s committee that same year, 1953, the year before Salt of the Earth was even released.
US entertainment unions opposed the film as well. IATSE and the Screen Actors Guild reportedly tried to halt production of the film for over a year, and director Biberman and producer Jarrico stated that they had hired people who had been effectively blacklisted by IATSE, including four Black workers — the assistant to the director, an assistant cameraman and two technicians — all of them excluded under IATSE’s Jim Crow policies.
On May 24, 1959, the New York Times reported that the United States Information Agency included Salt of the Earth on its list of movies that it refused to show overseas. The film however was subsequently re-released in the US in 1965.
Adam: Yeah, so if your film was too overtly pro union, centers race and racist cops, centers women’s liberation in the context of unionization, all a lot of bad stuff going on there. Hiring Black crew members. All that was very icky and so this movie was effectively thrown into a memory hole.
Nima: It was so un-American that it wouldn’t be shown overseas.
Adam: So un-American it is the only film ever to be blacklisted. Not a filmmaker, but the actual film, the only film ever to be blacklisted. Next up is Norma Rae from 1979. This is a more mainstream film, but one that has not so subtle politics, maybe slightly more subtle than the previous entry.
In the Southern rural town of Henleyville, single mother Norma Rae Webster, played by Sally Field, works with her parents in a textile mill under conditions threatening the health of her, her family, and her co-workers. To shut her quote-unquote “big mouth,” management gives Norma a promotion, which she initially accepts but eventually rejects after realizing that the modest raise isn’t worth betraying the rank and file, her friends or family. When New York-based labor organizer Reuben Warshovsky, played by Ron Leibman, comes into town to encourage the mill workers to unionize, the galvanized Norma Rae takes an increasingly active role in the pursuit of victory for the mill workers.

The film’s director, Martin Ritt, was known for his catalog of tales of the oppressed, such as the 1972 film Sounder, about Black sharecroppers during the Depression. Like the makers of Salt of the Earth, Ritt had been blacklisted himself in the 1950s, an experience he captured in the 1976 Woody Allen/Zero Mostel film The Front. He said this in 1986, quote, “I make the kind of films that not too many people get to make in this town, though sometimes I’ve had to take the risk myself,” end quote.
Adam: According to the American Film Institute, quote:
Columbia Pictures, Warner Bros. and United Artists turned down the project. As explained in a 25 Feb 1979 NYT article, Alan Ladd Jr., President at Twentieth Century-Fox Film Corp., acquired it after Ritt convinced him that the film would be perceived as uplifting and not depressing…During negotiations with the studio, Ritt agreed to cut his salary in half to $250,000.
$250,000 is still a lot of money in 1979, so our hearts don’t bleed too much. But the point is to further demonstrate the friction filmmakers encounter when they do try to have pro union narratives, it requires them to, in this case, eat shit on half their salary.
Nima: Both Salt of the Earth, from 1954 and 1979’s Norma Rae depict unionization as going hand in hand with cross racial solidarity and the third film we’re going to discuss is no different. This is Sorry to Bother You from 2018.
Adam: The film was written and directed by Boots Riley, who has a history of activism in the Bay Area and has a history of pretty overtly left-wing politics, which of course, explains the politics of the film.
Sorry to Bother You tells the story of Cassius “Cash” Green, played by Lakeith Stanfield, who works, out of desperation, as a telemarketer for Oakland-based company called RegalView, where management repeatedly floats the abstract promise of a promotion. As Cassius’s co-worker Squeeze, played by Steven Yeun, hopes to start a union, Cassius ascends the ranks to become a handsomely paid and steadily promoted “power caller,” on the condition that he enthusiastically performs work far more grim than he could have possibly imagined.
Nima: So Sorry to Bother You certainly is one of the more ideological films that we are discussing in this two-parter, Adam. It is an allegory more than it is based on a true story or the, you know, story of a certain hero as emblematic of a movement. It is really a fantastical look at labor, at capitalism, and the horrors within those. So we’re going to break down some of the scenes from Sorry to Bother You.
At one point in the film Cassius somewhat reluctantly participates in a work stoppage organized by his coworker Squeeze and is called into the manager’s office, where his three supervisors offer the allure of a promotion to dissuade him from going any further, you can see parallels here to what happened to Norma Rae, right? We’ll give you a promotion if you just shut your mouth. Here is a clip from that scene from Sorry to Bother You.
[Begin Sorry to Bother You Clip]
Cassius: All right, hey, I know you’re gonna threaten to fire me and go ahead, whatever, I don’t care anymore because we’re gonna take this fucking place down.
Johnny: (Laughs.) Pack your shit and get out.
Cassius: Well, fuck you and fuck you and fuck you! Fuck you!
Anderson: Oh, no, no, no, no, no, no, Mr. Green. You’re starting to sound a little paranoid here. We’re the bearers of good news. Great news.
Johnny: Great motherfucking news.
Anderson: Great motherfucking news. Power caller.
Cassius: What the fuck?
Anderson: Yeah we just got the call. They think you’re A1 material, you’re going upstairs my compadre. Yes, you are getting a promotion. at 9am tomorrow morning. Do you have a suit?
Diana: Of course he does. Powerful, young, strong, intelligent, power caller.
Cassius: But they —
Anderson: Oh, God, they’re gonna do what they’re gonna do. You’re not going against their actions. All their issues are down here. Not up there. Two very different kinds of telemarketing.
Cassius: Okay. Um…
Anderson: This is your moment. Don’t waste it.
[End Sorry to Bother You Clip]
Nima: Cassius soon discovers that as a power caller, he’ll be selling repugnant yet lucrative products from a company called WorryFree. The work stoppage has become a full-blown strike at this point, and Cassius tries to play to both labor and management, telling the workers trying to organize that he supports them quote-unquote “from the sidelines” while simultaneously reaping the financial rewards and class signifiers of his new position as a power caller.
[Begin Sorry to Bother You Clip]
Salvador: Cassius? What’s up, man? Where you been? What’s up with the suit?
Cassius: I got promoted.
Squeeze: What does that mean? Are you a manager now?
Cassius: That means I’m a power caller now. About to be paid.
Squeeze: We’re all trying to get fucking paid. But we’re going to do it as a team. Are you on the team?
Cassius: Yeah, I guess I’m still on your little team but I’m playing from the bench. The bench where you sit and get your bills paid. You know, my uncle is about to lose his house.
Salvador: Cash, I’m Sorry about your uncle man, but they don’t mean sell out.
Cassius: I’m not selling you all out. My success has nothing to do with you. All right? You just keep doing whatever it is that you’re fucking doing and I’ll root for you from the sidelines and try not to laugh at that stupid smirk on your face.
[End Sorry to Bother You Clip]
Nima: Later, Cassius is invited to an especially decadent party at the mansion of WorryFree executive Steve Lift, played by Armie Hammer —
Adam: Who we now know was playing himself basically.